India vs. the Philippines: Which Outsourcing Destination is the Best in Asia?

For decades, Asia has always been the destination for outsourced jobs due to its cost-effectiveness, skilled workforce, and having a good grasp of the English language. But among all the Asian countries, two nations stand at the top and go toe to toe in terms of which one provides better talent in the BPO sector. India and the Philippines are most often the top picks of global outsourcing staffing firms as they are often compared in terms of their standing in the industry.
Both India and the Philippines share many similarities with each other, which is precisely why they are popular with most IT-BPO companies from the US, Australia, and Singapore. If we look at the countries’ deep talent pools, labor costs, and advancing infrastructure, we can compare and dissect which country stands at the top of providing capable outsourced talent.

Both countries are known to have high education standards, but they do share varying degrees of English proficiency. In Asia, the Philippines is considered one of the most prolific countries in terms of English speaking skills. They rank 14th overall globally for English literacy and have a 92.5% proficiency rate. But perhaps the defining characteristic of English speakers in the Philippines is their ability to maintain a neutral accent, which is a major consideration for most companies looking for customer service support.
On the other hand, India is ranked as one of the best English-speaking nations worldwide, ranking 4th in Asia and 28th in the world when it comes to English literacy. However, on the topic of accent neutrality, India seems to be a little behind. It has been reported that around 70% of all incremental domestic BPO businesses—particularly call center services—were being lost to the Philippines because they fell short of maintaining a neutral accent. As mentioned above, accent neutrality sits quite high on the priority list of traits that companies look for. Heavy accents can be a bit difficult for native English speakers to understand, and therefore easily create communication barriers. This is an apparent crippling factor in the way of addressing customers’ needs.
Another important factor to look at is the cultural influences of both nations. While India has its British influences, which account for their high English proficiency, Filipinos actually have many Western cultural influences and are far more exposed to the language on a daily basis. Aside from English being embedded in the Philippines’ education system from primary all the way to the tertiary level, there’s also the level of exposure Filipinos have to American TV channels. Indian individuals, on the other hand, are more limited in these kinds of exposure via media.

India has a working advantage in the labor market, especially for multinationals looking for a practical outsourcing option. India is known to offer relatively low labor costs compared to almost any other country in the world right now. The average monthly salary of a contract worker in the country stands at approximately 148 USD. Customer service representatives (CSR) get an average pay of around 3,091 USD, while web developers get more or less 3,980 USD annually.
In the Philippines, labor costs are marginally higher compared to India. The average annual salary of outsourced CSR in the country is at 3,925 USD, while web developers get 5,243 USD annually.
Looking at purely labor costs, India edges out the Philippines by quite a bit. By and large, salaries in the Philippines are a fraction of those in Western countries but still a bit more expensive than in India.

India boasts of impressive infrastructure in select cities like Bangalore and Delhi, where numerous aesthetic and modern buildings are located. These are perfect for any IT-BPO operations prompting multinational companies to do business in the country. Within these business and technological hubs lies a highly developed internet infrastructure that allows excellent connectivity for seamless business operations.
On the other hand, the Philippines can be seen to have modern infrastructures even outside of the capital of Manila. Multiple provinces like Iloilo and Cebu are now seen as business and tech hotspots equipped to house IT-BPO operations. This is due to the rapid infrastructure developments done by private corporations with the support of the Philippine government. Then comes the rapidly developing connectivity infrastructure in the country, with fiber connections becoming increasingly more accessible.
In terms of infrastructure and connectivity, both countries exhibit great promise. While the Philippines seems to be rapidly expanding their infrastructure to house more IT-BPO services into multiple parts of the country, India overtakes them in terms of reliable connectivity. India’s IT-BPM infrastructures are more concentrated on major cities like Bangalore and Delhi, but they do offer faster and more stable internet connectivity.

In terms of government support, the Indian government has been known to impose restrictive regulatory hurdles, such as compulsory registration of Other Service Providers (OSP), removal of BPO units from existing OSP guidelines, compulsory static IPs, and more. For many years, the BPO sector in India has received very little support from the government, which served as a huge barrier for India’s growth as a BPO hotspot.
Recently, however, the government of India has finally liberalized the working restrictions that for so long governed India’s IT-BPO and outsourcing staffing industries. According to the country’s IT Ministry, new guidelines have allowed the BPO sector to facilitate more flexible working environments that could be beneficial to the industry’s further growth.
On the other hand, the outsourcing industries in the Philippines have been enjoying extensive support from the government for many years. They have been offering subsidies to attract foreign investments in the country, particularly to investors in the IT-BPO sector. Tax benefits are also provided as well as infrastructure facilities at a low cost.
The Philippine government has also signed a Code of Good Conduct with the outsourcing companies to ensure the workforce’s safety and encourage smoother collaboration with BPO companies. This collaboration resulted in the creation of training programs designed to impart skills necessary for the industry.

Overall, it looks like the Philippines and India are fairly matched in the global outsourcing market. India’s salary costs are lower, but it comes with shortages for certain positions and a significantly lower English fluency rate. Meanwhile, the Philippines has slightly higher labor rates but makes up for it with their problem-free English communication skills.
CrewBloom is a remote staffing agency based in the US. We work with companies of all sizes from various industries to find premium sales and support talent so they can exceed their growth goals. Schedule a call with one of our outsourcing staffing experts today! 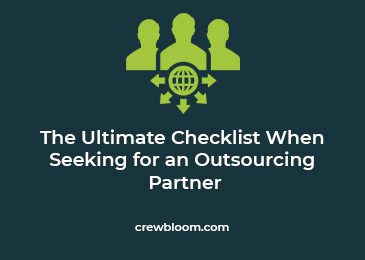 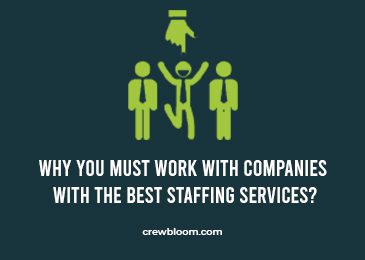 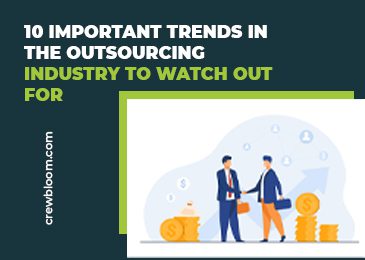